Admissions to The Corbet School for all Year 7 September Intakes will be via Shropshire Council’s online admission facility.  This will be available from September in the application year.  Parents unable to apply online should contact the Council’s Admissions Team on 0345 678 9008, at Shirehall, Abbey Foregate, Shrewsbury, SY2 6ND.  Applications will be required by 31st October via www.shropshire.gov.uk  The School’s Admissions Committee will then consider all applications made to this school via the Council and will inform the Council’s Admissions Team of the places to be allocated.  The Council will inform parents on behalf of the school of its decision by post on 1st March, or the nearest school day that particular year.  This will be a common date for secondary allocations across the country.  Parents will only be offered one school place for each child.  Therefore if The Corbet School is not able to offer a place, the Council will inform parents/guardians of a place at another school which they can offer to the child. Parents are advised that it is in their child’s best interest to ensure that they have given more than one preference on their application form.

It is important that applicants are aware that: where a year group already meets or exceeds the school’s published standard number of 135 it would not normally expect to admit further pupils. This is because the Governing Body’s Admission Committee have always felt that the admission of more pupils would lead to overcrowding and large classes in some teaching sets and would jeopardise the ability of the school to provide effective teaching to all of its pupils. Additional admissions to The Corbet School would thus prejudice the effective use of resources.

Late applications: Parents are asked to note that the closing date for applications is 31st October.  Any applications received after this date will not be considered until all other allocations have been made unless there are exceptional circumstances , e.g. family has just moved house into the area or a family difficulty such as a serious illness or bereavement.  In such circumstances the school and Shropshire Council will endeavour to include the application up until the first week in February.  Otherwise late applications will be placed on a waiting list.

Any applications from Year 7 mid-year or applications to other year groups need to be made using the Application form available below:

All rural secondary schools in the North and South Shropshire area all have a “attendance area”.  Priority will be given to children who live within the defined area.  If you want more details of the catchment area for The Corbet School, please ring the Admissions Advisors on Shrewsbury 0345 678 9008, or access “Local View” on the Shropshire Council’s website www.shropshire.gov.uk  Please note that the definitive catchment are those offered by the Admission Team in the event of any disputes.

Children with a Statement of Special Educational Needs or EHCP which names The Corbet School will be allocated places, applications will then be prioritised according to the following criteria:

Priority 1: Looked After Children and children who were looked after but ceased to be because they were adopted as defined in the schools Admissions code.

Priority 2: Children living within the designated catchment area with a sibling at the school on the day they are due to start.

Priority 3: Other children living inside the designated catchment area.

Priority 4: Children living outside the attendance area with a sibling at the school on the date they are due to start.

Priority 5: Children outside the catchment area without a sibling but who have attended a maintained primary school that lies within Corbet’s catchment area for a year prior to transfer.

Priority 6: Children of staff at the school.

Priority 7: Any other children living outside the attendance area.

Where the admission number is reached and a decision has to be made to differentiate between children who fall into the same criteria groupings of Priorities 1 – 6 above, priority will be given to those children who live nearest to the school. For admissions purposes all distances are measured as a straight line distance on a computerised mapping system between the home address and the nearest entrance gate of the relevant school by pinpointing their eastings and northings.  The shortest distance being given highest priority.  Where two addresses are within the same block of flats, the lowest number of flat nearest to the ground floor will be deemed to be the nearest in distance.

In the case of twins or triplets from the same address the school will endeavour to admit both or all siblings.  In the event that two individual applications are exactly the same after all other criteria have been taken into account, a tie breaker will be used.  This will be by random allocation and overseen by an independent party not connected with the admissions process.

**In very exceptional circumstances the following criterion may apply and such children may be allocated a higher priority above Priorities 2 to 6.

Where a child has particular health reasons for wishing to attend The Corbet School.  Such cases will only be given priority if medical evidence can be provided which demonstrates that attending Corbet School is essential to the medical well-being of the child.  The Governing Body reserves the right to check the essential nature of the medical condition with the relevant medical practitioner

When will I be informed about the allocation of a school place?

Allocation Days are when the results will be posted. Shropshire Council sends post by ‘second class’ to all applicants on the following date:

Secondary Allocations are posted out on 1st March

Online results will be made available on the above allocation date.

Contact the admissions Team if an allocation letter has not been received within a week of this date.

What can I do if my application is not successful?

You can request a review to be added to the waiting list and/or an appeal. Your allocation letter will explain how to do this and an appeal form will be provided. Sometimes places which have been allocated are no longer required and these vacancies can then be re-allocated in accordance with the admissions criteria, but only to those requesting to be placed on the waiting list for review and/or appeal. At this stage we will also consider any late applications or changes of preference which could not be considered earlier.

What will happen if I am not offered any of my preferred schools?

This does not happen very often. However, it has occurred in a few cases particularly where parents or carers have not stated 3 preferences, or where the catchment school is not included as one of the preferences. In such cases a place will be offered at the nearest school with places still available. Applicants will have the opportunity to request to be placed on a waiting list for their original preferred school or for other schools and, if necessary, an appeal.

What if I am still not successful when the waiting list is reviewed?

You will be informed whether you have been successful at the review stage. If you are not successful we can either keep your name on a waiting list in case places become available at a later date, or we will arrange for an appeal to be heard by an independent appeal panel if you wish.  Not all appeals are successful. The panel will have to weigh up the situation at the school against your personal circumstances.

Can I put my child’s name on a waiting list?

Parents who have been unsuccessful at the main round of appeals for admission at the start of Reception year (infant and primary schools), year 3 (junior schools), and year 7 (secondary schools) can, on request, be added to the waiting list.

A review will take place a few weeks after the allocations date and you will remain on this list if you wish and/or if you continue to the appeal stage. The following parents will automatically be kept on a waiting list, unless they specifically decline and accept the offer of a place at another school:

1. Any new applicants who have moved into the oversubscribed school’s area after the date of appeals.

2. Anyone specifically requesting to be kept on the waiting list but who does not wish to take their case to appeal.

The waiting list will be maintained by Shropshire Council for the first term of the academic year of admission.

If any vacancies arise they will be offered to those people on the waiting list in strict accordance with the published admissions criteria. At the end of the term, the waiting list will cease to operate.

Shropshire Council operates a Fair Access Policy with regard to vulnerable and hard to place pupils, a copy of which can be obtained from their website or the Admissions Team. Children placed in schools through this policy will take precedence over children on a waiting list.

What happens at an Appeal?

Appeals are heard by an Independent panel.  Parents/carers can put their case in person to the appeals panel.  Personal circumstances that the Admissions Team are unable to consider at the initial allocation stage or at the review, can be considered alongside distance and other considerations by the panel.  The panel’s decision is final and binding on all parties – the Admissions Authority, the school and the parents.

Where the panel receives a number of appeals for the same school they will hear them all on the same or successive days.  There will usually be a ‘plenary’ session to which all parents/carers are invited and where representation is made by the Council’s representative, sometimes supported by the Headteacher or Governor of the school, explaining why there would be difficulties in accepting more pupils at the school.  Appellants then have individual appointments for presentation of their own personal circumstances and reasons for wanting the particular school.

All queries should be addressed to: 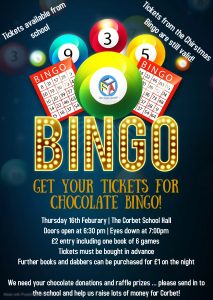 Save the date - CFA Chocolate BingoThursday 16th February 2023Doors Open at 6.30pm, Eyes down at 7.00pmTickets will be on sale shortly.Chocolate donations and raffle prizes can be sent into school. Thanks ... See MoreSee Less